Haven’t we all had times we wished for a second chance?  Maybe we’ve dreamed of a second-go-round to do something over and make it better?  Or perhaps we linger on that favorite memory wishing for the chance to relive it all over again.  Over thirty years have passed since Mike Mularkey first met Betsy at the University of Florida where she worked in the athletic department.  He was immediately smitten and it wasn’t long before he asked her to marry him while the two were decorating a Christmas tree.  It will always be a loving moment for the two of them, but on August 5, 2013 Mike decided to make it an incredible magic moment the whole family will remember forever! 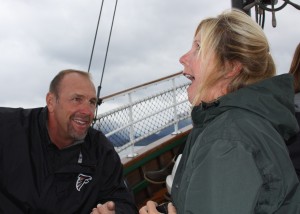 Ten years ago Mike and Betsy rented a Winnebago with their two teenage sons, Shane and Patrick, to see the wilds of Alaska.  The trip was so memorable that the sons requested a return trip this summer, only this time they would have the opportunity to share Alaska’s stunning landscape with Patrick’s wife, Kristin and Shane’s soon to be fiancée, Hanna.  Excited, Shane was already devising a plan to make the beauty of Alaska the backdrop for his upcoming marriage proposal. 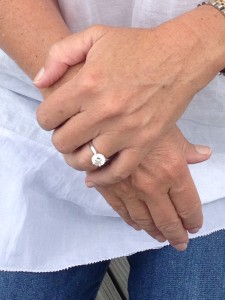 The tickets were bought, the bags were packed and the Winnebago was reserved for a 12 day venture traveling among the splendors of Mt. McKinley and the Kenai Peninsula.  But unbeknownst to his family, Mike decided to sneak one more extra little package into his bags before leaving Atlanta.  He had been so impressed with the amazing attention his sons had given to their marriage proposals that he decided he wanted his upcoming 30th wedding anniversary to afford him the opportunity for his own second chance proposal, one that would be memorable and beautiful.  With his recently purchased stunning round brilliant diamond solitaire from Tara Fine Jewelry Company, Mike made reservations for six to board Betsy’s favorite ferry ride, The Danny J. from Homer, Alaska to a small island.  Midway through the trip with the sound of water lapping at the boat and surrounded by the magnificent Alaskan landscape, Mike stood up in the open-air ferry and gathered the passenger’s attention.  Bypassing his sons’ embarrassment Mike brought Betsy by his side and got down on one knee. Acknowledging the sacrifices she had made for his demanding career and praising her for her devotion to raising their two sons, Mike presented Betsy with the extraordinary new ring.  Shocked and thrilled Betsy turned towards a boat filled with joyous applause and faces glistening with sentimental tears.  Later the passengers ate at a picturesque island restaurant with plenty of celebratory toasts to cap off the perfect day.

Intentionally planned with beautiful scenery Mike marked this unforgettable occasion with an amazing keepsake that will always celebrate this incredible moment in their lives.  Yes, Mike is pleased.  This time everything was done just right:  the perfect setting and the perfect ring surrounded by the ones he loves most.