From Puppy Love to Happily Ever After: Michael & Celine’s Unique Love Story

It’s funny how love can spark in the most astonishing ways! For some of us, love began with an enamored glance across the room and a bashful smile given in return, but for others, love blossoms in a more unconventional way. For Michael and Celine, it was their first love that brought them together in the most unexpected, yet the most romantic, way possible! 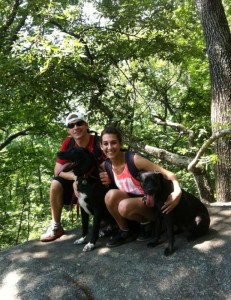 In 2010, Michael Newsome and Celine Romanus left their out of state schools and transferred to Georgia’s very own Kennesaw State University. Still adjusting to the campus especially the long walk across Campus Green, neither Michael nor Celine were expecting to fall head over heels in love, but they did! A lovable Black Labrador Retriever named Riley had stolen Celine’s heart, while Michael was becoming more and more smitten with a Lab-mix 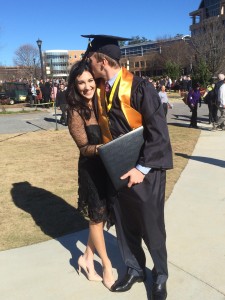 named Lila. When Michael and Celine met through mutual friends, it was no surprise that they quickly bonded over their new found loves. They decided to have a puppy play date at a nearby park. It was here – under the warm summer heat – that these two saw their “puppy love” transform into so much more!

Nearly five years later on the morning of Michael’s graduation, family and friends gathered to congratulate him on such an amazing accomplishment. Having closed one chapter of his life, Michael was nervous but eager to start another chapter that very day.

The family made reservations for lunch at Chicken and The Egg. Of course, Celine wanted to be there to celebrate Michael’s achievement, but Kennesaw’s infamous gridlock traffic nearly made it impossible. Stuck in KSU’s parking deck with stand-still traffic from the graduation crowd, Celine was forced to think outside the box. She called her parents and asked them to bring two cars to rescue her and the rest of the party from their 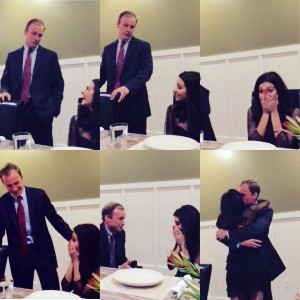 parking lot prison. Mom and Dad did their job but it wasn’t exactly what she had in mind, but when the going get’s tough, sometimes you have to go along for the ride! Cramped in the back of her mom’s two-door convertible Mustang, Celine sat anxiously as they drove down Highway 75 with the top down and her hair flapping in the wind. They arrived at the restaurant just in time – Celine’s hair frizzier than before – but in time, nevertheless.

With everyone finally seated at the restaurant, Michael took the floor thanking his family for being there for him throughout his entire college career. He then turns to Celine, saving the best for last. He thanks her for her support, tells her how much he appreciates her, and reaches for the black Tara box in his pocket. After seeing the Diamond Ring and hearing the words: “Will you marry me?” 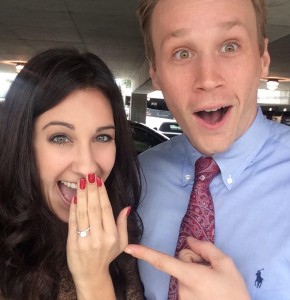 Celine – excited, overwhelmed, and completely caught off guard – blacks out. Her heart drops and butterflies flutter about in her stomach, but she manages to say yes. This newfound love that started at the dog park had blossomed into a pleasant and unexpected fairy-tale! 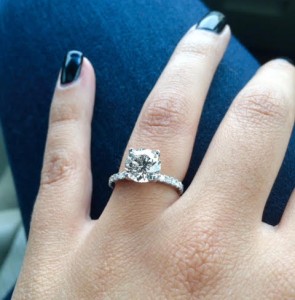 It was December 16, 2015 when Michael proposed to Celine. He gave her an extraordinary Forevermark Diamond Engagement Ring that he knew she would adore! Knowing that Celine would want a quality Diamond that would forever shine bright, Michael asked his friends at Tara Fine Jewelry Company to help him find the perfect Engagement Ring. As a jeweler that loves beautiful Diamonds and one of a kind Engagement Rings, we were absolutely thrilled to help Michael find the perfect Engagement Ring. Thank you, Michael and Celine, for allowing us to be a part of such a special moment for you two. Your unique love story is something we will never forget. Congratulations! We wish you the both the best!